David Storey is from Workington, West Cumbria. He lives and works in Brighton, East Sussex.
He studied art and design at Hornsey College of Art in London, and initially took up a career as a record sleeve artist and realized   a number of award winning designs. For the past twenty years however he has focused exclusively on painting, his original obsession. In that time his work has been widely exhibited and collected, both throughout the UK and abroad.
His psychologically charged paintings are about people and places – half recalled memories at the point of fading away. Figures emerge from complex layers of texture and colour – fragments of a narrative that the viewer is invited to complete.

"Sharing in their fragility, the characters Storey depicts are aware they stand on the edge, but they are aware too that we who look on them are also fragile. The blurred faces gaze out as if to ask if we who exist now have forgotten those who went before and if we believe our experiences today are really unique; the couples trapped in tension stand as a mirror to all relationships, while the most haunting characters come as associates of Ebenezer's ghosts, ready to awaken us to who we truly are."

David Storey studied art and design at Hornsey College of Art in London, and initially took up a career as a record sleeve artist at Chrysalis Records and 2 Tone (a subsidiary of Chrysalis), where he was responsible for a number of award winning designs. For the past twenty years however he has focused exclusively on painting, his original obsession. In that time his work has been widely exhibited and collected, both throughout the UK and abroad.

David Storey's haunting paintings are, above all, an exploration of memory – memory in all its fleeting complexity.We often find memories travelling back towards us, meeting us as we are in this very moment and inviting us to bring our experience and changing worldview to bear on them, giving each memory new shape and new meaning. This world of memory is the fertile territory David explores in his captivating work - a world that is in constant, though often subtle flux. And within that world he has one particular focus: memories captured at the point of fading away.Working from his studio in an old Victorian dairy in Brighton, East Sussex, David draws deeply on the images and atmospheres of his own childhood and teenage years spent growing up in West Cumbria.

Indeed, the landscapes, lights and skies that illuminate many of his paintings are gleaned from a small area within a 30-mile radius of Workington, the town where he grew up. He references elements of this world regularly - maybe the wild fast-changing skies above the Solway Firth, the fells and hillsides looming from a veil of mist or the old sandstone Victorian buildings typical of the area that turn black when it rains. It's here too where he spent cherished summer holidays absorbing the changing lights above the sea and the sandy, hill-encircled shorelines of that coast that feature in many of his paintings.

Yet despite these distinct reference points, these are by no means works of nostalgia. The alluring figures that populate the paintings belong to no particular time and place. Instead he draws his ideas from a range of sources, but most frequently from old photographs – the sort that often turn up in car boot sales or bric-a-brac shops, where whole family histories might be found parcelled into a cardboard box or a tattered envelope. These memories are rescued and then re-imagined at that point where they might vanish forever.

It's from these found images that the process of creation starts as David begins to unlock the characters that will eventually take centre stage in the finished work. From studies on small pieces of board to the full canvas where the process of creation moves much faster, done in deliberately brief and intense bursts of creativity, working as much with his hands, palette knives, rags and sponges as with the brush to manipulate the oil paint. It's a process of teasing out ideas that can take, he admits, anywhere from five days to five years.

This process of realising the final image swiftly and physically lends an intensely expressionistic quality to these figurative paintings. You see it particularly in the, often dramatic, sky or seascapes that frame the figures at the centre of the work. These backdrops draw us into a grander, darker, more turbulent space or, in the brighter more colourful backdrops, to a place of deeper calm.

Yet it is the figures that hold the attention and draw us in, their bodies nearly always strongly drawn, but their faces left deliberately indistinct and sometimes almost blank. This is how David strives to achieve what he calls a "glimpsed" effect.

The effect is subtle and compelling. Even in the sunniest and most colourful pictures – a woman sitting quietly on a sand dune at Allonby or the 'Children on a Hillside' – the optimism is always balanced by a sense of isolation, of loss, of lives only half-remembered, qualities that prevent the pictures from ever being sentimental.

They have that same ache, and that same hint of darkness, that is more directly found in the edgier paintings where he is experimenting with a more subdued, often monochrome palette such as 'Hymn to the Light'. The paintings speak of the extraordinary things to be found in profoundly everyday events - and it is this that, ultimately, makes the paintings so accessible, yet so intriguing.

There are also links back to an earlier point in David's artistic life when he started his career as a record sleeve designer working in the music industry producing those iconic 2 Tone sleeves for the likes of The Specials and The Selecter. Interestingly, it was here that he started using found images from obscure photo libraries to bring these very different creations to life. But the desire to paint was strong and it was this that persuaded him to turn his back on design to focus full-time on painting and begin his eventful voyage in the world of memory.

Other significant moments have informed that journey. Moving to live by the sea in Brighton – with all its dazzling, ever-changing lights – propelled him on his way, providing constant inspiration. The birth of his son Luca in 2008, marked a moment when his worldview changed fundamentally, unleashing a cascade of new ideas.

In his recent works we see those ideas and his unique way of working coming to fruition. These are the works of an artist who is striving to perfect his technique, forever trying to move closer to the point where he can capture an essence of human life that can so often and so easily slip through the fingers.

"My paintings are an exploration of memory. They offer glimpsed of half-remembered figures and faces – 're-imagined ancestors' recovered from a personal archive of the forgotten.

I come from West Cumbria, which is an isolated, bleak coastal plain, welded onto the side of the Lake District. The municipal buildings and churches are mainly Victorian and built of sandstone that turns black when it rains... and it rains an awful lot there. This melancholy and primordial world is the one that often features in my work.

An idea can come from anywhere: old photos, TV, books, the internet etc. I then embark on a process of unlocking the idea through a series of sketches and experiments. This journey of development and discovery can take anything from 5 days to 5 years until a kind of alchemy takes place and things seem to harmonise of their own accord in a way that can be very rewarding.

I paint in an expressionistic way using rags and sponges because the physical marks and textures are a fundamental element of what I am trying to achieve. The challenge for me though is to retain an economy of execution – an effortless effort." Figures on a Lawn 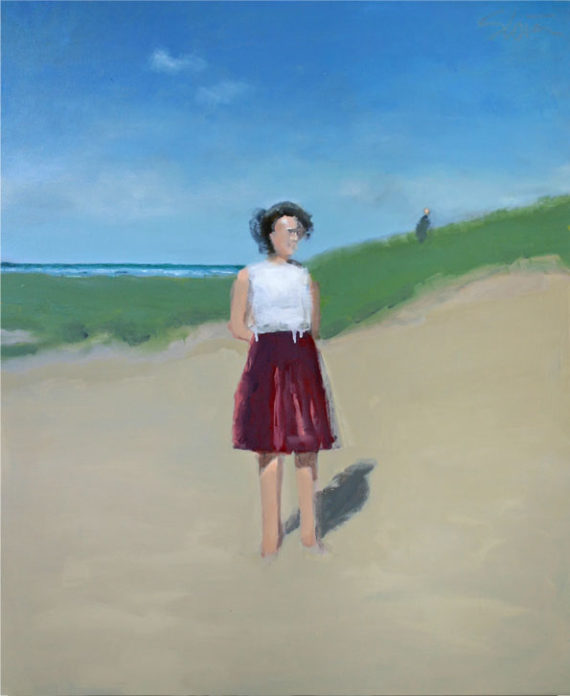 Figures on the Beach Girl on a rope swing The Cape of Good Hope Horses on the beach

David Storey Egg tempera and oil on a plate 5… David Storey Egg tempera and oil on a plate 5… TOP Do NOT follow this link or you will be banned from the site!
We use cookies to ensure that we give you the best experience on our website. If you continue to use this site we will assume that you are happy with it.OK