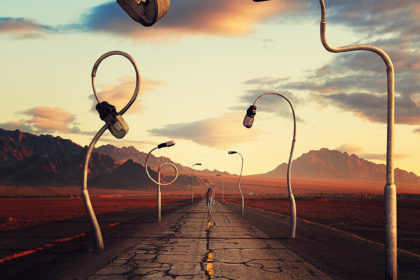 The Later Years” is an 18-disc set containing musical material by David Gilmour, Nick Mason and Richard Wright – after the departure of Roger Waters – since 1987 (5 CDs, 6 Blu-Rays, 5 DVDs and 2 singles plus an exclusive photo book and various memorabilia). The period includes three studio albums: “A Momentary Lapse of Reason”, “The Division Bell” and “The Endless River” as well as two live albums: “Delicate Sound of Thunder” and “Pulse”. Included are more than 13 hours of unreleased audio and video material, including the concerts in Venice in 1989 and Knebworth in 1990, and an elaborately reworked, newly edited version of the Delicate Sound of Thunder film by Aubrey Powell.

Aubrey Powell/Hipgnosis as Creative Director is responsible for the overall design of the box and tells BROWSE GALLERY how the box cover and the single “Lost for Words” were created in collaboration with other creative minds.

A surrealistic HIPGNOSIS image for the cover of the box set

When David Gilmour and Aubrey Powell were discussing the Later Years Box for Pink Floyd, they decided that a return to a more surreal hipgnosis cover image would work best, Aubrey Powell recalls:

“The design for Pink Floyd – The Early Years had been very dry and and a graphic based on the original Pink Floyd touring van of 1966 which was black with a white diagonal stripe. So I set about compiling a list of people I wanted to work with. At the top of my list was Michael Johnson from the Johnson Banks studio. He came up with an interesting concept and with some input from me we decided on a young woman walking a desert road near Joshua Tree in California. As she passed the street lights at the side of the road they would seem to curve and turn in an unusual manner. It’s partly Sci Fi and partly about power. The power to change the normal into the abnormal by a simple twist of fate. The power of Pink Floyd. Rupert Truman who photographs many pictures for me these days did the photography and I designed the box set with the help of art director Peter Curzon. 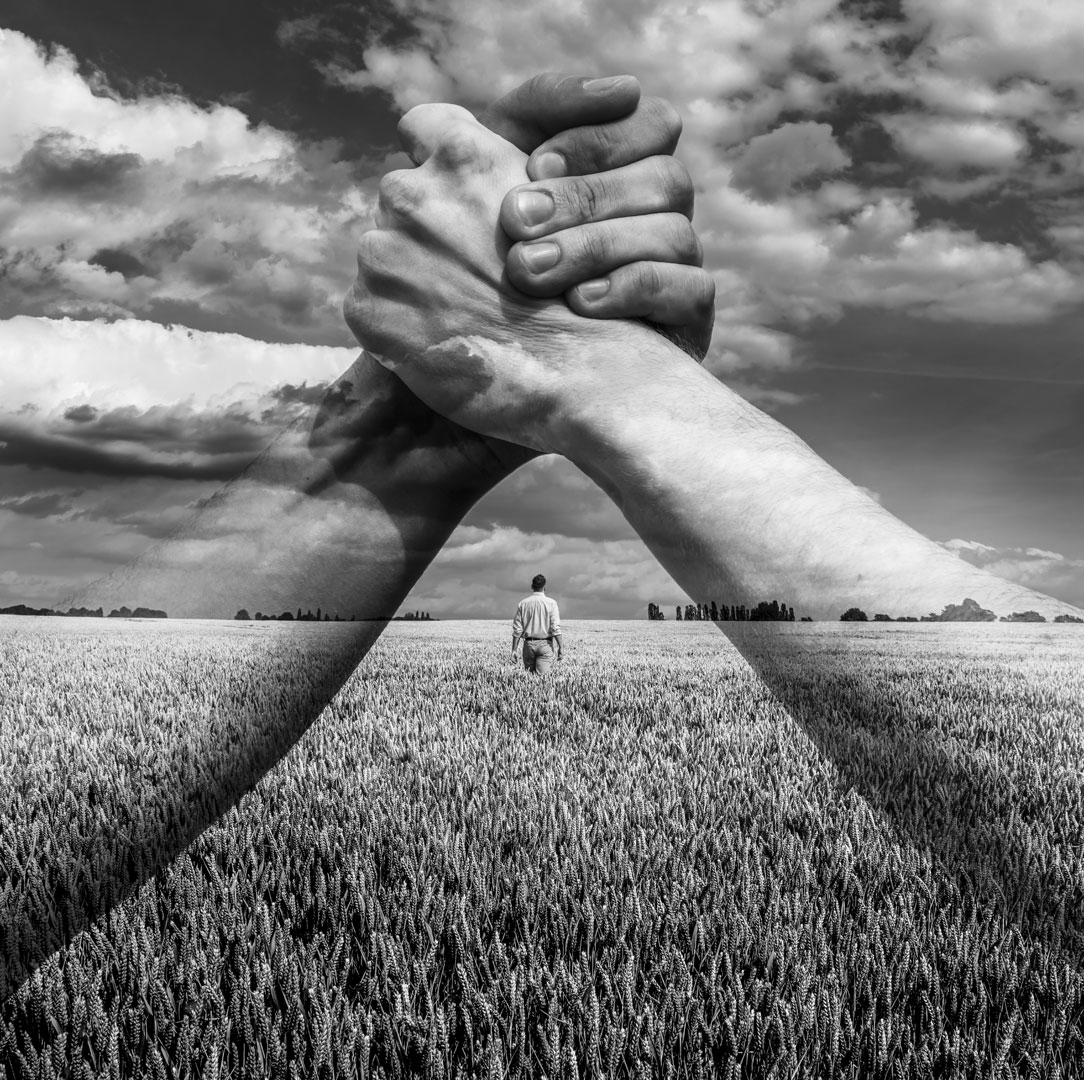 “The Lost For Words photo design  came to me after reading David Gilmour and Polly Samson’s lyrics about an angry man feeling lost and alone”, says Aubrey Powell. “I had photographed my wife walking through a wheat field and the idea just came to me. The image of arm wrestling as a symbol of an internal struggle, a kind of duality of angry thought, seemed both appropriate and created a bridge over the lone man in the landscape. The moody clouds add to the heavy sense of unease within the picture. “

The Best Of The Later Years 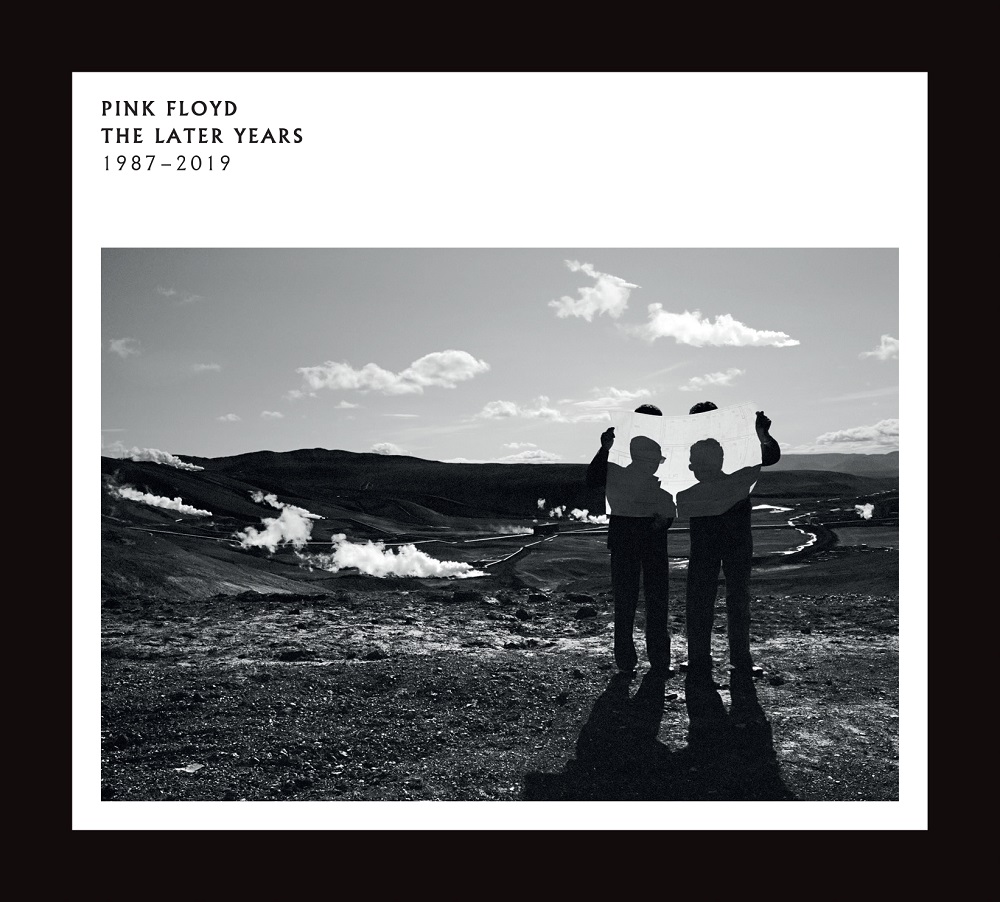 The two men reading a white map I had photographed in Iceland in 1975 as an idea to present to Pink Floyd for the Wish You Were Here album. Hipgnosis decided not to show it as we felt the Man on Fire image worked much stronger as a front cover. However, in retrospect the Icelandic shot is so appropriate to the later fall out of Pink Floyd in1987, when David Gilmour and Nick Mason carried on with Pink Floyd alone without Roger Waters. As an image for the expression, ‘where do we go from here’ , it visually captures the narrative perfectly for this new release compilation album of Pink Floyd work from 1987 – 2019. “ Aubrey Powell,  Hipgnosis,September 2019
Thank you, Aubrey for  sharing these insights in the BROWSE GALLERY blog.

A detailed description of the various elements of the Pink Floyd Later Years box set content is published in the Pulse & Spirit blog.

A great source for more background information on the creative process involved in developing the artistic design of the box set and various elements it contains is The Lost Art of Conversation: A Pink Floyd Podcast (Episode 3: Artwork), in which David Gilmour and Aubrey Powell talk about how the different ideas were developed.

A selection of the great album cover art and photo designs by Aubrey Powell and Storm Thorgerson for Pink Floyd and many other rock legends can be found in the HIPGNOSIS Artist-Portfolios  or in Album Cover Art section of the BROWSE GALLERY Shop.

In autumn 2018 Aubrey Powell together with BROWSE GALLERY Berlin presented the retrospective DARING TO DREAM. PHOTO DESIGN AND ALBUM COVER ART by Aubrey Powell and Storm Thorgerson during the European Month of Photography, EMOP Berlin 2018, on the occasion of the 50th anniversary of the founding of HIPGNOSIS. The exhibition is currently travelling through Germany and Europe. If you would like to bring the exhibition to your city, please contact us: info@browse.gallery.