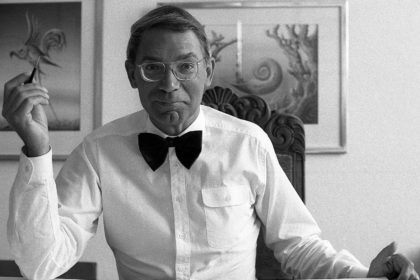 We will continue to celebrate 50 years of Berliner Malerpoeten (Painter Poets) from September 3 to November 6, 2022 with a new exhibition – in the south of the Republic, at the Museum of Earth History, Lithography and Stone Mining in Solnhofen – otherwise world famous for its fossil of the prehistoric bird Archaeopteryx.

Without Hans-Joachim Zeidler, one of the 14 Berlin painter-poets, we would hardly have ended up in the Bavarian town of Solnhofen and yet this is an amazingly fitting place for the 14 painting Berlin poets and writers. The Solnhofen Museum in the Altmühl Valley and the Berlin painter-poets of former West Berlin have surprising overlaps and affinities. In different ways, they are each concerned with nature, history, transience and its deposits and transformations, and both definitely share a love of stone, of lithography.

The Geo-Zentrum Solnhofen is located near a quarry for a particularly fine limestone. This is not only ideally suited for artistic lithographic printing and used accordingly a lot. The fine stone also houses, in unique detail, million-year-old fossils of all kinds of creatures that lived about 150 million years ago in a tropical island and lagoon landscape that stretched from Solnhofen to Regensburg.

The place is world famous for the fossil find of the primeval bird, Archaeopteryx, which lived in Bavaria 150 million years ago. Today it can be admired in the Solnhofen Museum as a filigree stone imprint alongside hundreds of other fossils of strange prehistoric fish, shells, dinosaurs and crocodiles.

Shells, sea, all kinds of flotsam and fossils, mythical animals and amorphous creatures – a fascination with sometimes grotesque images of transience also occupied Hans-Joachim Zeidler.
‘On Fridays I always paint fish,’ he is said to have quipped (Karl Krolow 1974) – a fine dose of irony that he had in common with many colleagues of the Berlin painter-poets. 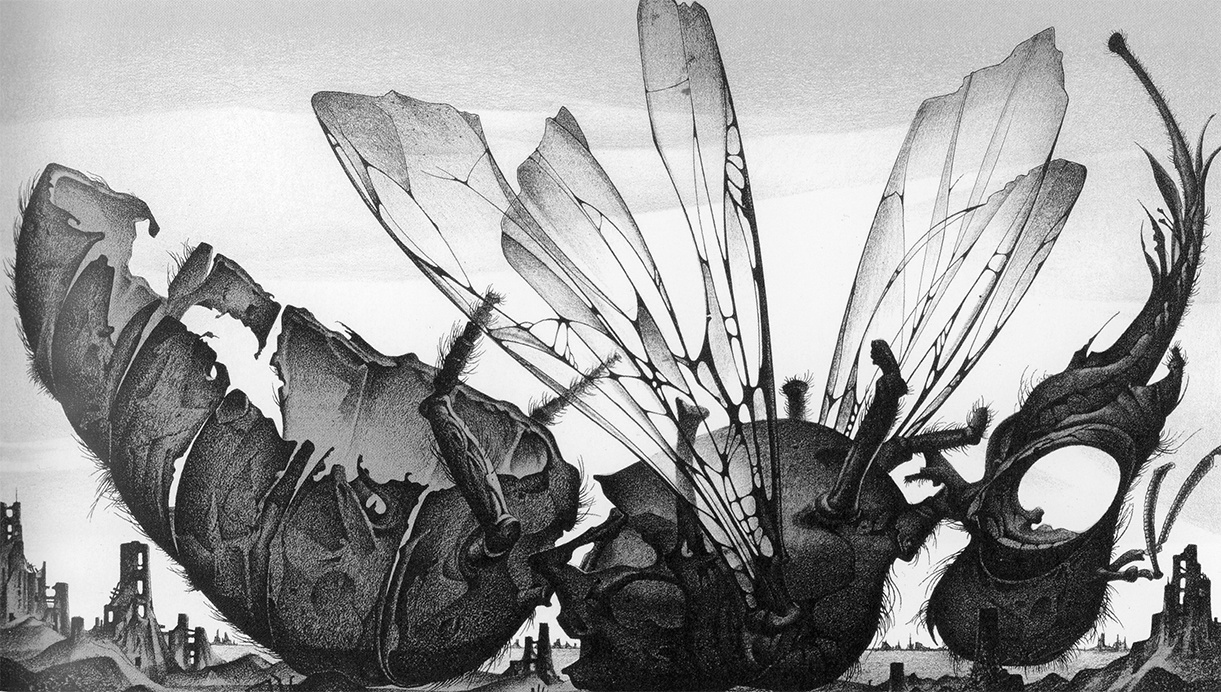 For all the jokes the Berlin artists allowed themselves in their works, they also shared with many people of their generation above all the basic perception of an existential crisis of humanism in the second half of the 20th century. Their biographies, artistic creations and subjects are still tangibly marked by the experiences of war and the crimes of National Socialism that destroyed people and culture.  The confrontation with the destructive nature of man, metamorphoses and transitions between animate and dead matter, hermaphrodites between man and animal are visible in many works of almost all members of the group.

The recourse to figures of the animal world for the artistic representation of the situation of man in a civilized world in crisis, in which untamed wildness and instincts but also death, wounded or but sheltering nature in the form of animal figures or mythical creatures show up, can be found in the works of many artists: Günter Bruno Fuchs’ imaginative graphic figures, Artur Märchen’s full-figured, plump fantasy figures, or Friedrich Schröder-Sonnenstern’s demon-like hermaphrodite creatures, finely chiseled with colored pencils – in a lighter poetic form also in numerous drawings by Aldona Gusta’s “Mouth Women”, who freely and sensually transform themselves into bird heads or fish tails at one or the other body curve. Günter Grass’s literary as well as his pictorial work is also teeming with fish, birds, frogs, scarecrows and rats, cats and dogs.  Hans-Joachim Zeidler’s main drawing subject was the scientific documentation and artistic transformation of remnants of evolution, the transience of animate and inanimate nature, and man-made destruction – grotesque, touching, often with a cryptic humor.

Born in Berlin in 1935, Zeidler began drawing at the age of six. At fourteen he wrote his first play, and at sixteen he began to study graphic design.

As a war child, Hans-Joachim Zeidler was influenced by the ruined landscape of Berlin. When Zeidler made his first exhibition in 1955 in the Berlin Haus am Lützowplatz, he had already discovered his bizarre-realistic style. He went to Tübingen, worked for a year as a scientific draftsman for the prehistorians and developed his own world of forms of erosion and transience from Berlin scrap, Tübingen fossils and the solidified lava masses of Stromboli. 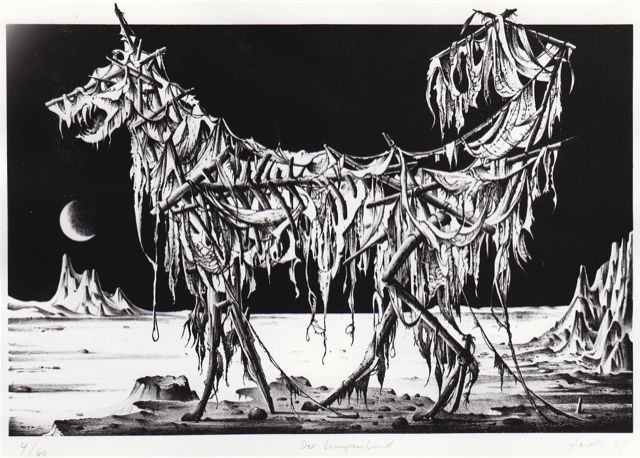 Not surprisingly, his works have found a home in the Solnhofen Museum alongside thousands of fossils far beyond Berlin. In 2004, the artist donated 138 lithographs to the Solnhofen community. Today, the museum of the Solnhofen Geo-Center owns Zeidler’s complete lithographic life’s work, his work directories and sketchbooks, as well as other works.

In May 2022, Dr. Martin Röper, scientific director of the Geo-Zentrum Solnhofen and friend of Zeidler, together with gallery owner George Arauner, presented their book “Berliner Malerpoet Hans-Joachim Zeidler – das lithographische Lebenswerk im Geo-Zentrum Solnhofen”. That would certainly have made the artist very happy. In 2010 he took his own life.

Now, on the occasion of the 50th anniversary of the founding of the group Berliner Malerpoeten by Aldona Gustas, an exhibition with about 30 works, photos and other documents can be seen at the Museum Solnhofen from September 3 to November 6. The exhibition shows Zeidler in the circle of his 13 colleagues of the Berliner Malerpoeten.

The artistic spectrum of the Berlin Painter Poets is broad and multi-layered. The dominant and pointed black and white of numerous prints and ink works by artists such as Zeidler, Fuchs, Gustas, and Meckel is contrasted by the luminous colors of watercolors and oil paintings by Kurt Mühlenhaupt, Robert Wolfgang Schnell, and Artur Märchen, and the fantastically differentiated colored pencil drawings by Friedrich Schröder-Sonnenstern. No less diverse are the literary preferences and text types of the authors: Novels, novellas, short stories and children’s stories, spontaneous poetry and complex experimental poetry.

So, what are you waiting for, let’s go to the Altmühltal to the exhibition 50 Years of Berlin Painter-Poets in Solnhofen and to the “global icon of evolutionary research” the “most famous fossil on earth, Archaeopteryx”. By the way, in the wonderfully designed a style=”color: #9664aa;” href=”https://www.museum-solnhofen.de”>museum (officially: Bürgermeister-Müller-Museum Solnhofen), visitors can see it not only as a fossil. As a graceful holgram, it floats towards us out of black nothingness – small, sharp and somehow magical.