Aldona Gustas is a Lithuanian-born German writer and graphic artist and a formative figure in the independent West Berlin art and cultural scene in the post-war period.

In the late 1950s and 1960s, Aldona Gustas became friends with artistic personalities such as Günter Grass, Günter Bruno Fuchs and Robert Wolfgang Schnell. These contacts and her own interest in combining literature and painting led her to found the Berlin Painting Poets in 1972.  For the group of 14 painting writers and writing painters, she curated exhibitions and edited anthologies. Through her, the Berliner Malerpoeten also became internationally known.

Aldona Gustas also provided the opportunity to link an exhibition of Berliner Malerpoeten and six contemporary (female) Lithuanian artists in a common show entitled Oxymora, as part of Lithuania’s Presentation as Guest of Honor at the 2017 Leipzig Book Fair.

Female identity, eroticism and sensuality represent central themes in the lyrical and pictorial works by Aldona Gustas, which she has also combined in numerous publications. According to Olav Münzberg, spontaneity, brevity and simplicity are her basic constructive principles – in both her literary and visual works. Many of her speech-images are populated with paradoxes. As androgynous figures with the curves of their bodies transformed into fish or birds.

In 2017 her most recent volume of poems Zeit zeitigt was published by Corvinus Presse in an exclusive manual print-run. Currently an exhibition with 30 drawings, Aldona Gustas und die MUNDFRAUEN (Women’s Voices) - is travelling through museums and libraries in Lithuania for 2 years, organized by Browse Gallery and funded by Goethe-Institute Lithuania.

Aldona Gustas was born on 2 March 1932 in Karzewischken, Šilutė (Heydekrug) municipality, Lithuania. She spent her early childhood years with her parents, her grandmother and her uncle Johan in Memelland, which was then part of Lithuania. The year 1939 became the year of fate for the family, which in the following years was caught between the fronts of Nazi Germany's war of conquest and extermination and the Soviet Union's Stalinist policy of conquest and occupation.

In early 1939, in return for a Lithuanian-German non-aggression pact, the Nazi government, with the consent of the Lithuanian government, annexed the Memelland back into the German Reich. Aldona's young uncle Johann is arrested there for the first time by the Germans in 1939 for "political reasons".
In the same year, Aldona moves to Vilnius with her parents. There, 8-year-old Aldona and her family experience the invasion and occupation of the city by Soviet troops in June 1940.

In the spring of 1941, the family came to Rostock as part of the Nazi resettlement of Lithuanian Germans. Inevitably, Aldona had to learn German. She lost the Lithuanian language forever.
Aldona's uncle Johann was arrested again by the Nazis in Lithuania in 1941 and was murdered in the Groß-Rosen concentration camp in April 1942.

As a teenager, Aldona experiences the war in Rostock, then a centre of the armaments industry, which was heavily bombed and massively destroyed several times. At the end of the war and with the entry of Soviet troops into Rostock in May 1945, the family was separated. The father was presumably taken prisoner by the Russians and interned for several years in the Soviet gulag in Siberia.

Aldona, her mother and her one-year-old brother Johann make their way to Berlin out of fear of the Soviet occupation troops. Here they were registered as political refugees in Charlottenburg on 26 September 1949.

In 1952, Aldona Gustas married the writer and journalist Georg Holmsten. They remained a couple until Georg Holmsten's death on 21 July 2010.

Georg Holmsten was part of the military resistance group that planned the assassination attempt on Hitler from 1943 onwards as an information officer in the Ausland/Abwehr office headed by Admiral Canaris.  After successful execution, he was to serve as head of the German Intelligence Bureau. Georg Holmsten was in Bendlerstrasse on 20 July 1944 and is one of the few survivors of the 20th July actors.

2014 Browse Gallery Berlin was able to win Aldona Gustas over for 2 exhibition projects:  Berliner Malerpoeten (Pulsierendes Leben - Pulsierender Tod) - 50 years after the first exhibition of the group and pursueing a solo presentation of drawings from her series Mundfrauen (Women's Voices) - both realized as part of Browse Gallery's exhibition cycle Inside Out I - Die Kreuzberger Bohème der 50er - 70er Jahre.

Following these exhibitions Aldona Gustas work as a graphic artist has attracted considerable attention in Germany and also in her old home country Lithuania.

Graphic art and paintings by Aldona Gustas have been in cluded in collections of
Čiurlionis National Museum of Art, Kaunas, Lithuania, Friedrichshain-Kreuzberg-Museum, Berlin and of the City of Wiesbaden in the years 2015 and 2016, other works are part of private collections. 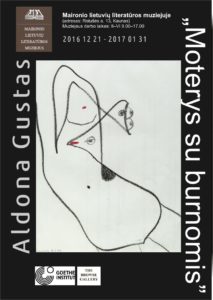 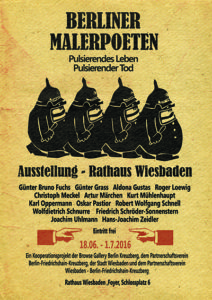 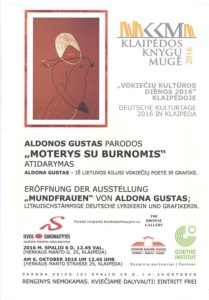 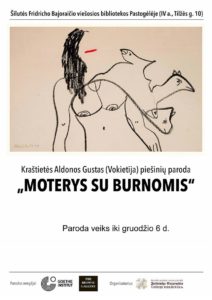 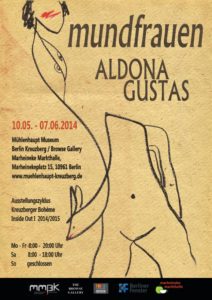 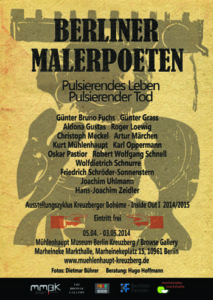