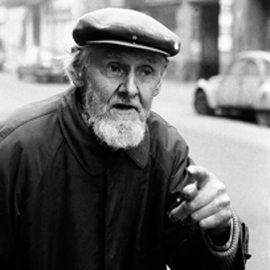 Friedrich Schröder-Sonnenstern (1892 Kaukehmen - 1982 Berlin), draughtsman and painter, was regarded abroad in the late 1950s and early 1960s - especially in France - as the most important German painter of the post-war period. Today, the Berlin painter is known almost only in specialist circles.

Born in East Prussia, Schröder-Sonnenstern made his way through the first decades of his life as a milker, clown and tramp, founder of a cult, alternative practitioner and others. He spent various years in insane asylums and prisons. In 1942 he managed to escape from a labour camp to Berlin. Here he survived the Second World War.   He made his first drawings in 1933/34 in an insane asylum. He was over 50 when his painting career began in earnest in 1949.

His rise as an internationally celebrated painter was meteoric when the Surrealists presented him in an exhibition in Paris in 1959. Dubuffet, Max Ernst, George Pompidou and Picasso were among Sonnenstern's first buyers, triggering a boom in demand among collectors internationally in the early 1960s.

Since Schröder-Sonnenstern could no longer cope with this boom alone, he began to employ assistants in his workshop. When some of them produced forgeries in Schröder-Sonnenstern's style on pre-signed cardboard boxes and this became known, art critics and the market dropped Sonnenstern. At his death in 1982, the "cult star" of yore was impoverished and hardly known any more.