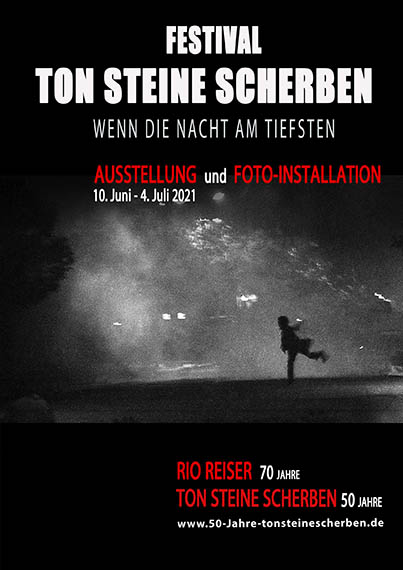 The year 2020 marked the 50th anniversary of  the legendary German rock band Ton Steine Scherben and band leader Rio Reiser would have celebrated his 70th birthday had he not died far too early in 1996. Members of the Scherben (the often used short name for the band), Browse Gallery and the Geschichtswerkstatt e.V. initiated the festival WENN DIE NACHT AM TIEFSTEN (When the night is deepest - one of their most famous song titles). This will now take place in Berlin from June 4 - July 4, 2021, after the Corona-related postponement from 2020. With a variety of events (concerts, exhibition, theater, readings, discussions, cinema, city tours, etc.) and several parties involved the birthday anniversaries will be celebrated, and not only that. The anniversaries also serve as an occasion to remember and reflect.

The exhibition and photo installation use photographs and other contemporary documents to examine the origins, impetus, performance, development and aftermath of the band Ton Steine Scherben. Curated by John Colton, the Browse Gallery exhibition explores the development of the Scherben in interaction with social forces, social, political, and cultural movements of the postwar period (late 1960s to 1980s). It traces their experiences, struggles, dreams, and attitudes, and raises questions of their relationship to the present.

The band can be seen in their time in the outdoor photo installation, in the rondel of the park in front of the Bethanien. Positioned in the center of the  rondel are shard-shaped picture islands with large-scale photos of the band and their friends amidst shots of contemporary history - situations, people, places - in West Berlin but also beyond. The images were taken by photographers such as Jutta Matthess, Rita Kohmann, Axel Benzmann, Günter Zint, Astrid Proll, Wolfgang Krolow, as well as by journalists working internationally.

Inside, in the Projektraum, visitors will encounter installations, objects, and photographs that bring selected moments of the band's experience and development to life. These are commented on from the subjective perspective of members of the band, the Scherben community, and other contemporaries in short text, audio, and video statements. Differences and contradictions come to light. These not only reflect diversity and heterogeneity within the Scherben. They are also exemplary for their time - within the spectrum of radical left-wing political movements, but also exemplary in their relationship to radical artistic expression and independent pop cultural production, as embodied by the Scherben.

With their attitude and their music, Ton Steine Scherben and Rio Reiser influenced generations of musicians in Germany to come, and they touched the biographies of countless people. These can be seen and heard in the partcipatory exhibition element of the Memory Board. On the digital board, people can share memories and thoughts about Ton Steine Scherben and Rio Reiser and their time, publicly in the form of short digital media contributions.

Analogous to the practice and attitude of Ton Steine Scherben, the exhibition does not pursue a linear and closed narrative. It wants to open up a space of experience and understanding in which looking back also stimulates a current determination of position: Where do we stand now? When the night is at its deepest and while the cards are being reshuffled.

The event is funded by Hauptstadtkulturfonds and the Senate Department for Culture and Europe.

More information about the festival (German):
Festival Homepage WENN DIE NACHT AM TIEFSTEN
The exhibition of the festival web page (German)
Memory Board ( what it is and how to particpate, German)