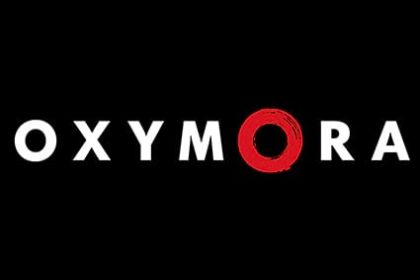 Today we live in a time where oxymora are showing up in media discourse all over the place. Most of us don’t notice them or understand the term oxymora. What does it actually mean? To cut it short: ALTERNATIVE FACTS, for instance. While in the current poltical disourse oxymora are being used to normalize lies and autocratice abuse of power even in democratic societies by turning the language in against itself to to paralyze and shut us up, when used in the realm of fiction, literature and art, oxymora show a rather subversive and liberating quality.

OXYMORA is a driving force for creativity.The term oxymoron (from Greek oxys ‘sharp (witted)’ and moros‘stupid’) is a stylistic device consisting of two notions or concepts that are opposed, contradictory or mutually exclusive. In literature and art, oxymora are used to create dramatic tension or intensification, or to give expression to what is all but inexpressible and unspeakable. Beyond logic, it may be this expression that makes us conceive the truth about human sensitivity, which exceeds conventional constructions of reality and casts suspicion wherever these claim to be universal.

Artists of different eras and generations are united in their dubiety of seemingly unambiguous truths. In a real work of art, love makes us suffer, but also soothes; truth enlightens, but also raises doubt, and whatever is physical, even sinfully prurient, also longs to be sacred. Only in art — whether in literature or in visual arts — we set aside our everyday life and embark on the disruption suggested by the artist, exploring their doubts about the habitual perception of reality. The work of art is like a dialogue partner who stimulates our critical conscience and prompts us to analyze reality from different points of view.

The artists represented in the exhibition Oxymora hail from different eras and interact with different cultural and political contexts. The artwork of contemporary Lithuanian female artists is exhibited together with a selection of pieces by the Berliner Malerpoeten, created mostly in the 1970s to the 1990s. The connecting link is Aldona Gustas, a German lyricist and visual artist of Lithuanian origin. In 1972, she assembled in Western Berlin an informal group of fine artists who were also writers, and writers who also drew and painted. The artists of different countries are even more strongly interconnected in their attitude of questioningly poetic objection: Creed in doubt. Interest in boredom. Weariness of beauty. Passion for calm. Sarcastic sensitivity. Oxymora.

It is up to the spectator to explore the insights and the potential for contestation suggested by the various artists — in a world where the formula anything goes has ultimately, globally, expanded from the world of art and culture and infiltrated political and social areas as wel: The time of black snowflakes.

Oxymora are conquering the public dialogue and practice as conveyed by the media; absurd contradictions are becoming less and less noticeable, increasingly abundant in speech and ultimately socially acceptable. The intention behind these

Oxymora is neither poetry nor spirit of contradiction; their real purpose is to undermine democracy and diversity, and legitimize what is illegitimate: Alternative facts. In times of BOOMING SILENCE, art and literature can enhance our sensual and verbal perception of truth and lie. They break ground by way of oxymora, displaying oxymoronic qualities — whether in isolation or through curated confrontation.

The exhibition Oxymora is a part of Lithuania’s Presentation as Guest of Honor at the 2017 Leipzig Book Fair. The exhibition was initiated and financed by Lithuanian Culture Institute and Goethe Institute in Vilnius.