WALL on WALL is an exhibition by photographer Kai Wiedenhöfer. It features large format panorama photos of walls which are seperating people in 10 countries of the world. The open air exhibition will be presented on a “Peace Line” in Belfast in cooperation with Greater Shankill Partnership, supported by BROWSE GALLERY Berlin, Roger Waters, Steidl a.o.

They are still there, the “Peace Lines”  in Belfast, Northern Ireland –  fences and walls which have been seperating protestant und catholic communities in the city for 50 years,  erected in 1969 to keep the batteling parties apart. The exhibition WALL on WALL will be shown in Belfast on the occasion of the 50th anniversary of the building of the first Peace Line in 1969 and also of the 30th anniversary of the fall of the Berlin Wall in the fall of 1989.

The show consists of 37 large panoramic images (3×9 m), showing photographs of walls seperating people from one another in eight regions accross the world.
Covering 360 m. or 1200 m² of the Peace Line, the Belfast exhibition reaches well up to the first and original display of WALL on WALL on the Berlin wall in 2013.  The exhibition, at the time also supported by the Browse Gallery, attracted enormous international press attention and drew more than 300.000 visitors during its running time between 10.7. and 10.11.2013. 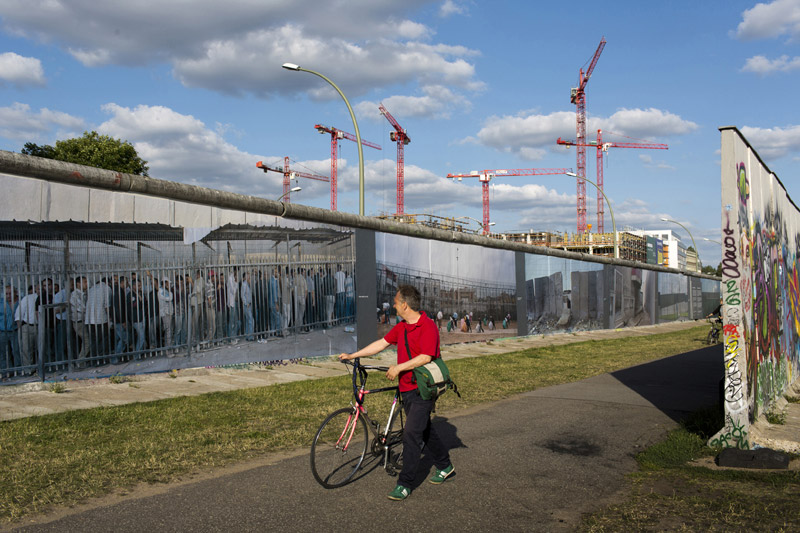 WALLonWALL: visitors of the exhibition in front of the wall in Bethlehem, the border fence in Melilla (Spain), the wall in Baghdad (ltr), Berlin 2013 © Kai Wiedenhoefer

The physical medium for the show WALL on WALL is Belfast´s longest and tallest Peace Line in Cupar Way. The panorama photographs by documentary photographer Kai Wiedenhöfer will be printed on billboard paper and mounted with wallpaper glue on the plain surface of the Peace Line. 35 photographs of wall constructions all over the world and 2 images of the fall of the Berlin wall. The inclusion of these 2 images in the exhibition is crucial for Kai Wiedenhöfer: “The message of the show is in brief is that the walls and fences of borders are no solutions to today‘s global political, ethic, religious and economic problems. The Berlin Wall was the best proof for this thesis – peace and solutions for problems begin where walls fall not where they are erected.”

This is a message which needs to be herad today more than ever. In an age of mounting wars and armed conflicts and resulting refugee and migration movements, old walls are fortified and new ones are springing up. Instead of the original 8 photographed wall locations the Belfast show features panorama photos of 10 walled spaces all over the world.
Starting with Belfast, Kai Wiedenhöfer intends to show his work in other countries which still have existing separation walls.

Crossing the walls in our minds

Aim of the Belfast show according to Wiedenhöfer is to “bridge the wall between the divided communities and to promote mutual understanding. But also to raise awareness under us fellow Europeans and also to make a clear statement against the Brexit and the growing fortification of borders in Europe.”

For the realisation of his project Wiedenhöfer cooperates with Greater Shankill Partnership, a local charity which has been committed to the social, economic and physical rebuilding of the Greater Shankill area in Belfast.  The area was at the heart of the N.Ireland conflict for 35 years and has suffered decades of social and economic decline and violence. Up to today the area is surrounded by “Peace Lines”.
The process of bringing WALL on WALL to the area has already brought people from both parts of the local community together. Internationally , the Belfast show of WALL on WALL reminds the European neighbours that the unsolved problems of Norhern Ireland are burning up again these days. It stands as a warning that Brexit might trigger a referendum on the unification of Ireland and worsen the situation in Northern Ireland.  There are other ways of dealing with conflicts: “The fall of the Berlin wall 30 years ago is a modell of peaceful conflict resolution. Remembering it gives hope and motivation to  seek alternative ways of dealing with conflicts.” (Kai Wiedenhöfer)

With the fall of the Berlin wall  many people hoped that walls in other parts of the world might come down too and old conflicts would find new, peaceful solutions. Such was also the hope of young photographer Kai Wiedenhöfer. 15 years later he realized that his hopes had not been fullfilled. There were even more walled borders being built, even though it was  clear for everybody to see that walls and fences have never been a solution for political, religious, ethnic or economic conflicts. On the contrary, they solidify images of seperation in our minds, when today more than ever, we need to come and work together on finding solutions for common problems in our complex and largely interconnected global world.

This insight motivated Kai to start his project WALL on WALL.  Over a period of six years between 2006 und 2012 he undertook several journeys to take photographs of walls and fortified borders at eight different places in the world.

In 2013 Kai Wiedenhöfer showed the results of his photographic research –  36 spectacular panorama photographs – in the exhibition WALL on WALL on the backside of the famed Eastside Gallery on the Berlin wall.
At the time, the exhibition was presented in the context of BERLIN PHOTOFESTIVAL 2013, organized  by Browse Gallery. WALL on WALL was co-funded by Browse Gallery with means from the European Culture Fund in our transnational Projekt OPEN THE SHUTTERS,  looking at the role of conflict photography in different armed struggles.

Five years later, in and around Europe, fortified borders are growing to hold off the influx of refugees and migrants.  The exhibition WALL on WALL now includes two more locations of border walls:  The Greek – Macedonian border (120km) and the border between England and France in Calais  (8km). At the same time, Donald Trump enforces his vision and spends billions of dollars to build a  great wall on the border to Mexico.  Images of prototypes of this wall are also shown in the exhibition.

BROWSE GALLERY Berlin gladly supports the Belfast show of WALL on WALL, as we believe in the need to show and cherish the impact of Kai’s powerful photographs at a time when walls, nationalism and ideologies of difference and exclusion drive us further and further apart. They remind us of the physical, social and mental borders which we need to overcome to work on building a common future on a planet which is facing severe and complex global problems.