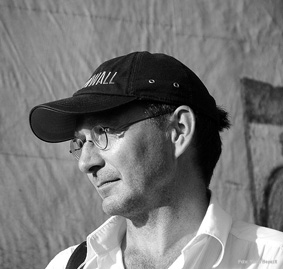 Kai Wiedenhöfer, born in Germany in 1966, received a MA in photography and editorial design from the Folkwang University of the Arts Essen and studied Arabic in Damascus, Syria. Since 1989 the focus of his work is mainly the Middle East.

He has received numerous awards, as the Leica Medal of Excellence, the Alexia Grant for World Peace and Cultural Understanding, World Press Photo Awards, the Eugene Smith Grant in Humanistic Photography and the Carmignac Gestion Photojournalism Award. He has published four books with Steidl “Perfect Peace“ (2002) , “Wall“ (2007) and “The Book of Destruction“ (2010) which was exhibited as a solo exhibition in the Musée d´Art Moderne de la Ville de Paris.
In 2013 his fourth volume “CONFRONTIER “ about separation walls worldwide was published. The photographs were exhibited in the show WALLONWALL on 364m of the Berlin Wall.

In summer 2016 this show was succeeded by WARonWALL about the war in Syria which is accompanied by the volume “Syrian Collateral“. In December 2016 he received the Carl-von-Ossietzky Medal from International Human Rights League in Berlin.

From 27. September to 15. November 2019 Kai will be showing an extended version of  WALLonWALL open air exhibition of walls seperating people in 10 regions of the world in Northern Ireland.
36 panorama photos ( 9 x 3 meters) will be glued onto 360 meters of a "Peace Line", seperating catholic and protestant communities in Belfast.

The project is realized in cooperation with Greater Shankill Partnership, a local charity.
Browse Gallery supports the WALLonWALL exhibition in Belfast as it has done in 2013 when the show was originally presented in the context of Berlin Fotofestival THE BROWSE. Other supporters of the Belfast show are Roger Waters, Steidl Verlag and Belfast Exposed.