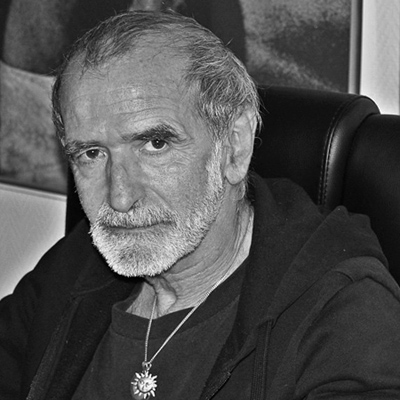 Berlin born American photographer and photodesigner Michael A. Russ (1945-2021) started his career in New York in the late 1960 where he joined the cultural underground scene. The trademark of his work, developped in the 70s and refined in the 1980s, became a unique photographic creation which he calls himself 'TinTone':  Grainy 35mm black and white film turned into chemically toned, masked, solarized and hand colored, 'one of a kind' silver gelatin prints.
The innovative style and raw look & feel of Russ' photography  in his exhibition “Prussian Blue” at the Los Angeles China Club in 1983 caught the attention of Tom Waits. Subsequently Waits commissioned Russ for the cover of his new landmark album Swordfishtrombones in TinTone style. "His approach to photography is with the eyes of a painter working with light."  Tom Waits

After the millenium Russ applied his TinTone photography also to large format industrial alu-dibond plates, which he exhibited internationally. "Russ's pictures reveal the sensuality and aestheticism of the female body. They reflect a spectacular experimental power, incorporating various photographic techniques, like layering, solarization and rayogramming to his negative/positive images. The artist's imaginative, partly eccentric arrangements evoke an atmosphere of mood which lends character and irresistible attraction taking the viewers mind effortlessly to the surreal world of motion pictures."  Kunst Magazin Berlin

Michael A. Russ, born in 1945 Berlin, came to America at age thirteen. While still in highschool in Denver/Colorado, he also studied ballet and acting and performed locally. After three years in the US Army, stationed in Germany during the cold war, he went to New York in 1965 intending to become an actor.
There he began photographing his fellow workshop acting students. Wilhelmina of Wilhelmina models encouraged him to become a fashion photographer.

In 1970 Michael Russ moved into his own studio off Union Square, right around the corner from Andy Warhol and The Factory, frequenting Max's Kansas City, a favorite hang out for Warhol and his friends as well as upcoming musical legends like David Bowie, Janice Joplin, Jimmy Hendrix or The Velvet Underground.

Grainy black and white images, chemically toned and /or hand colored, as though they come off the silver screen, displayed a very personal, distinctive style characteristic for his work - Tin Tones - as he would later call them. In 1976 Michael Russ moved to Paris and continued with artistically manipulating his silver gelatin prints (applying photographic techniques like masking and solarization). Adding hand coloring to his black and white, or chemically toned images lend a painterly aspect to the photographic work. Russ says his grasp of paintings developed early on through the images of German expressionists like Ludwig Kirchner, Max Beckmann and Otto Dix. In his treatment of color, he especially admired Marc Chagall.

In 1976 he moved to Paris and contributed "Sujets de Chambre" to Vogue Hommes. A portfolio "Michael Russ ou la Beaute du Grain", was published in Vogue Hommes in 1980. - Amongst others his TinTones were published in Art Direction Magazin, Cosmopolitan, Mode International, Mode Avant Guarde, Gunnars, IL, Photo Reporter, PHOTO Magazine as well as German Playboy. His postcard edition "The Compagnie" became part of the permanent collection of the Musee des Arts Decoratifs, a Louvre annex.

In 1981 Michael moved to Los Angeles which now became the center of his activities. There he also photographed actors and celebrities for the L.A. Times and L.A. Weekly, but mainly centered on exhibiting his TinTones in large format. In 1983 Michael's "Prussian Blue" exhibit at the China Club caught the attention of Kathleen Brennan who directed the attention of her partner Tom Waits's to Russ' work. Waits, who was at the time out on the look for a special design for his new landmark album "Swordfishtrombones", commissioned Russ to create a  cover for his Island label record in the TinTone style. The record sleeve, featuring Tom Waits himself, Lee Colima, the strong man and Angelo Rossitto (The mayor of Hollywood) became an icon of album cover art and contributed to the cult status the record obtained over the years.
Waits also appointed Michael as associate director and choreographer on the music video to the song "In the Neighbourhood" from that album for MTV, cooperating with famed film director Haskell Wexler (i.e. One Flew Over the Cuckoo's Nest" and "Who is Afraid of Virginia Woolf?").

1986 -1995 Russ returned to Germany, first to Hamburg and later Munich and focused on the darkroom, perfecting his TinTone variations. These were published as portfolios and on the covers of renowned trade and photographic magazines like Photo Technik International, ZOOM, Color Foto, W&V Art Work, New Mag, etc.
1995 -2001 were years of experiments. In Santa Fe/New Mexico (USA) he incorporated digital media into his work and had multiple gallery exhibits of TinTones in form of large scale Iris/Giclee prints in Santa Fe and Los Angeles. Russ commutes between the continents. In 2003 Fine Art Foto Magazine published a TinTone portfolio.

In 2007 he first introduced his unique large scale TinTones on Alu-DiBond-Silver/Industrial in Berlin. In 2012 he had an exhibition in Seoul Republic of Korea. In 2013 BROWSE GALLERY presented a retrospective of 40 years of Michael Russ' photowork Russ' "06:00 AM … positive/negatives - Fotografien von 1973 – 2013". The show entailed silver gelatine original prints and large format Aludibonds. TinTone Industrials were also featured at Berlin Fotofestival The Browse.

Until his death in 2021 Michael Russ primarily lived and worked in Berlin and New York, continuing his photographic experiments.
Together with Browse Gallery, lately he produced an exclusive photo art series of 10 motifs from the Swordfishtrombones photoshoot (1983) including the album cover image, featuring Tom Waits, Lee Colima, the strong man and Angelo Rossitto (The mayor of Hollywood). The image series is available in 2 different portfolios - both signed and in limited editions of 36 TinTone fine art prints, size 420 x 594 mm.  In the exclusive portfolio version Michael Russ has additionally handcoloured each individual TinTone print. For more information contact info@browse.gallery.