Aldona Gustas donates works of her exhibition for Ukraine-Aid 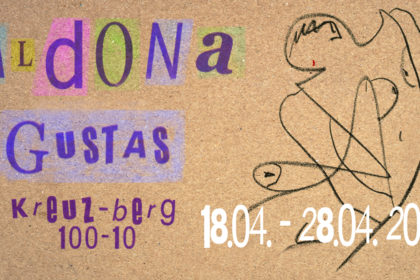 For the upcoming Bowse Gallery exhibition Aldona Gustas Kreuz-berg 100-10 (4/18-4/28/2022) on the occasion of the 90th birthday of Aldona Gustas (born March 2, 1932), the artist will donate the proceeds of all drawings sold during the exhibition to support people currently fleeing Putin’s war of aggression on Ukraine. With the people from Ukraine Aldona Gustas shares the experienced horror of war, terror, occupation and flight – during the time of World War 2, when she was a child, living in Lithuania.

In the drawings that can be seen in the exhibition, female figures from the series “Mundfrauen” (women with mouths), Aldona Gustas deals with themes that are central to her lyrical and pictorial work: female identity, eroticism and freedom. Most of the exhibited drawings were created in the 90s. The impulse for the series were Aldona Gusta’s critical observations of clichéd representations of women in the works of female colleagues. She wanted to artistically counteract what she saw as “trained” representations of mouths and hair. Thus, the “Mundfrauen” mouths and hair are always in motion, ready to speak, freed from the shackles of prevailing ideals of beauty.

The striving for freedom and independence pervades Aldona’s entire work and life, and she shared this drive with her friends in the group Berliner Malerpoeten (Berlin  Painterpoets), which she founded in 1972. Formative for this longing were the experiences of war, terror, expulsion, and flight that Aldona Gustas had to endure as a child.

Born in Lithuania in 1932, she spent her early childhood with her family in the former “Memelland”. In 1939, the family was caught between the fronts of Nazi Germany’s war of conquest and extermination and the Soviet Union’s Stalinist policy of conquest and occupation. In Vilnius (Wilna) in 1940, 8-year-old Aldona witnesses the occupation of the city by Soviet troops. In the spring of 1941, the family arrives in Rostock as part of the Nazi resettlement of Lithuanian Germans. In the same year, her uncle Johann is arrested by the Nazis and murdered in the Groß-Rosen concentration camp in April 1942. As a teenager, Aldona experiences bombing war and destruction in Rostock. At the end of the war and with the entry of Soviet troops into Rostock in May 1945, the family is separated. The father was presumably taken prisoner by the Russians and interned for several years in the Soviet Gulag in Siberia. Aldona, her mother and her one-year-old brother fight their way to Berlin out of fear of the Soviet occupation troops.

In 1952, Aldona Gustas married the writer Georg Holmsten. The latter belonged to the group of the military resistance that planned the assassination of Hitler and survived as one of the few actors of July 20, 1944.

In the post-war period, Aldona Gustas left her mark on the West Berlin cultural scene with countless literary publications and as founder and curator of numerous anthologies and exhibitions of Berlin painter-poets in Germany and abroad. She was active in the artists’ association Gedok and received several awards, including the Federal Cross of Merit.
Since 2010, she has exhibited her graphic works together with Browse Gallery several times and co-curated exhibitions of the Berlin Painter Poets in and outside Berlin.

Aldona Gusta’s sympathy and solidarity today is with the victims of the criminal war of aggression that the Putin government is currently waging against Ukraine. Therefore, 100% of the proceeds from the sale of paintings from the exhibition Aldona Gustas Kreuz-berg 100-10 will go to the human rights organization medico international, which, together with partner organizations of the Polish Grupa Granica, provides practical assistance to all people fleeing Ukraine on the ground in Ukraine and on the Polish border.